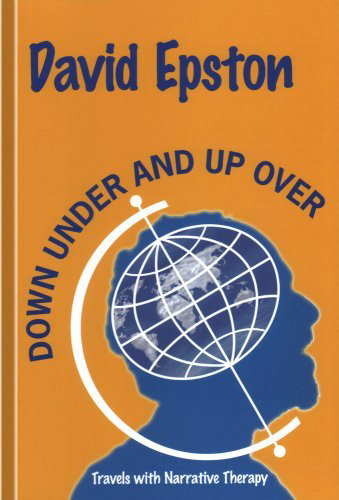 Down under and Up over – Travels with Narrative Therapy

"Several years ago, David was commissioned by the Association of Family Therapy (United Kingdom) to prepare a manuscript for a book. This was to include two halves, one of which came to be known as 'down under' and the other 'up over'.

The first half of the book (Chapters 1 to 6) draws upon many papers David has published over the years in Australia and New Zealand(or down under) that very likely were unread in the United Kingdom. The papers included range from 'In memory of Hayden(Hatu) Barlow 1973-1995' which was first published by Dulwich Centre Press in his 'Collected Papers'(1989). Others chapters are drawn from the now out of print- Gecko- a Journal of Deconstruction and Narrative Ideas(1997, 1998), Narrative Network News(Melbourne)(2003), Aotearoa New Zealand Social Work Review(2004) and most recently, the International Journal of Narrative Therapy and Community Work(2006).

The rest of the chapters(7-11) were exclusively prepared for publication 'up over' in this text. These chapters include wide ranging approaches to intractable bed wetting problems of teenagers, seemingly intractable and dangerous sibling disputes, the common but difficult problem of stealing and more specifically lifelong shop lifting and a version of a Plenary address delivered before the Australian New Zealand Academy of Eating Disorders in Adelaide(2006).

Each and every chapter features David's unique and at times scintillating ways of going about his 'practice' of narrative therapy."